Hatching one of Webster City’s Most Famous Businesses 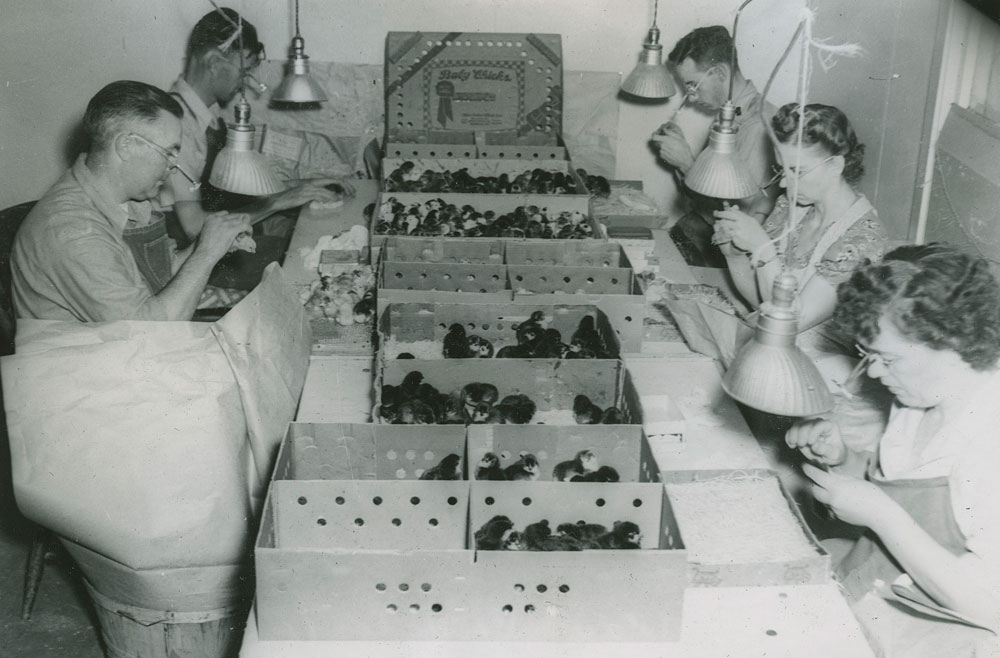 Iowans may have heard about the Murray McMurray Hatchery, which was established in 1917 in a back room of Webster City’s Hamilton County State Bank. Murray McMurray, who worked at his father’s bank right after college (L.A. McMurray was bank president), had a fascination with rare poultry breeds, and began selling his chicks (during banking hours) in 1917. The chirping was distracting and his father complained. The younger McMurray, however, was gaining recognition across the state for his new scientific approach to poultry breeding; he had begun to advertise in the Iowa Homestead farm magazine, and wartime orders were coming in.

When L.A. suddenly died of a heart attack three years later in 1920, the young McMurray was in line to take over the bank. Here is McMurray at age 32, the newly appointed bank president:

He had accounts to manage, paperwork to fill out, a bank to run, while his passion project–the hatchery–was rapidly expanding. A year earlier he had purchased a house that would become the new hatchery “office” in downtown Webster City. He also hired a small staff to manage books and the chicks, and was fulfilling parcel post orders all over Iowa and Minnesota. And when the Hamilton County State Bank was closed in 1926, McMurray focused on breeding.

The McMurray photographs, now accessible through Fortepan Iowa, beautifully document the innovative work of the century-old Murray McMurray Hatchery, which distributed an increasingly diverse list poultry and game birds around the region and then the country, packing chicks in ventilated boxes and delivering them by truck and later through the postal service, via rail and then air.

An Affinity for the Great Outdoors

Beyond photos of the hatchery and many images of chicks, however, the collection contains photos documenting the full and rich life of the McMurray family. Murray fell in love with Margaret Miller (their affection is obvious in this photo of them in 1910, three years before they got married).

The couple met at Grinnell College circa 1910. McMurray continued to graduate from the Yale Forestry School in 1912. Married in 1913, Murray and Margaret would take many camping trips together, beginning with their honeymoon trip to Tennessee.

In the next two years, Margaret and McMurray traveled out west to ride horses through Glacier National Park (1914) and visited redwood forests and King’s River-Canyon in California (1915). McMurray traveled with family members or friends to Arkansas, Colorado, New York, New Jersey and Connecticut in 1915 before Margaret gave birth to their first child that same year. Travel photographs appear in every decade of the collection.

The McMurray family cherished the outdoors, fishing, and camping; they spent weeks every summer at their cabin on Clear Lake.

The boy scouts earned points throughout the year, and the top point earners went on a Clear Lake vacation. Doug McMurray, who donated the digital scans of his family collection to Fortepan Iowa, used to participate in these contests. The sledding contest was always held on New Year’s Day on “Hospital Hill” and included speed, accuracy and distance. In 1962, Doug was using an old but fast Flexible Flyer sled, and recalls being one of the front-runners on speed and distance but being so upset when he got stuck on the side of Hospital Hill in deeper snow and lost valuable accuracy points. “It took me five more years until I won that thing,” he said.

Doug also fondly remembered the water boiling contest, which he managed to win two years in a row. “You had to go out and find the wood and build the fire from scratch,” he said. “It was always a can of soapy water to handicap the boiling. Your eyes would burn, and you’d get smoke in your eyes!”

The McMurray family collection (1888-1954) includes nearly 2,000 photographs. To find photos from the entire collection, follow this direct link, or search for donor “McMurray, Doug.” You can also use tags like “hatchery,” “chicken,” or “boy scouts” in Fortepan Iowa to find many photos from this collection related to those topics. A short documentary video of the McMurray’s involvement in Boy Scouts in the Webster City area and their elaborate outdoor competitions is available here: “Honor & Tradition: The McMurray Scout Troop | Webster City, Iowa.”